As we left the trailhead in Harpers Ferry, mist quickly wetted our clothing and skin. The forest felt lush, and we easily followed the white blazes along a trail that was alternately soft packed dirt, puncheon, and lichen-covered rock. Eventually the mist stopped, but there were thunderstorms in the forecast for later on in the afternoon. 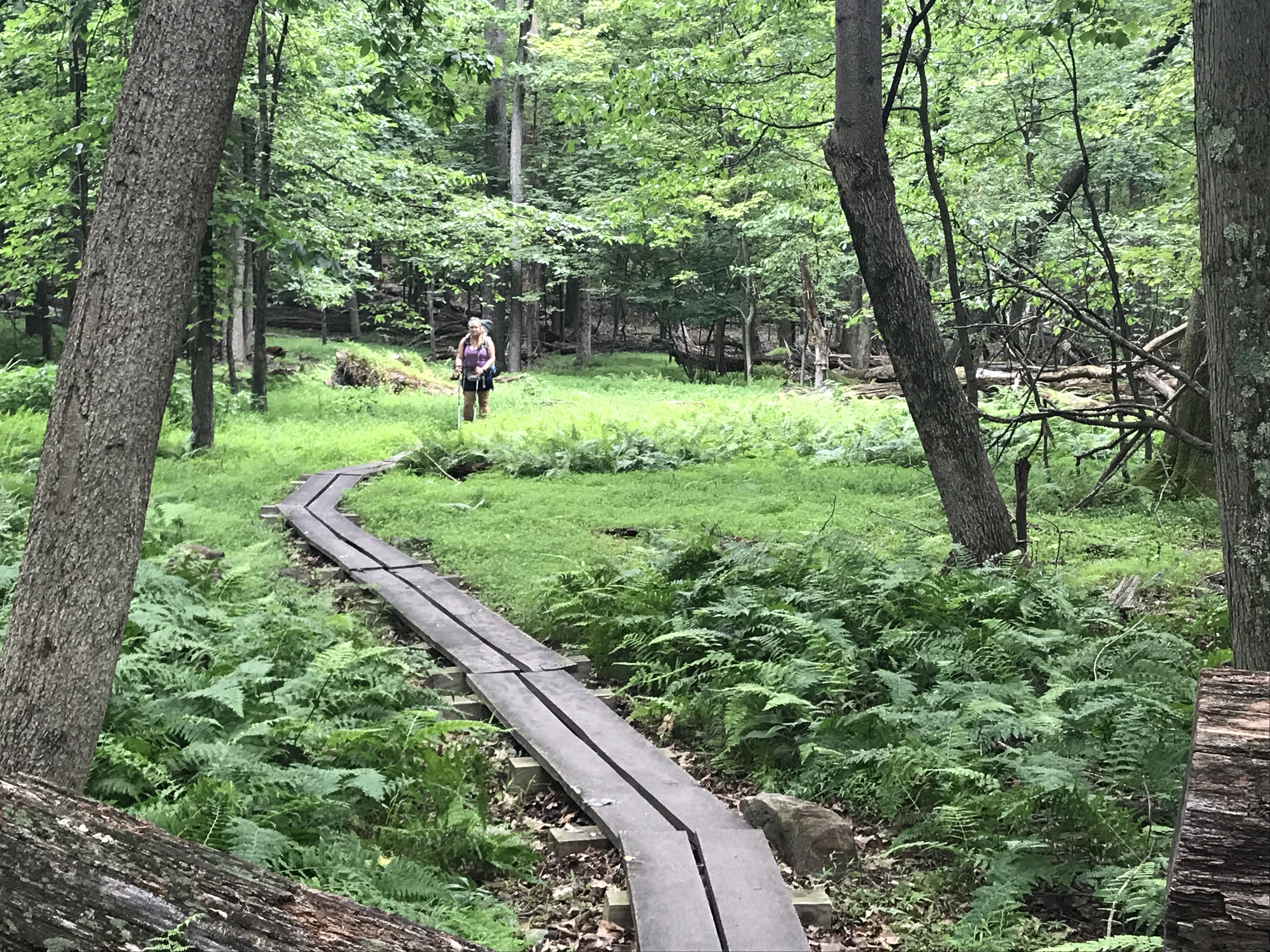 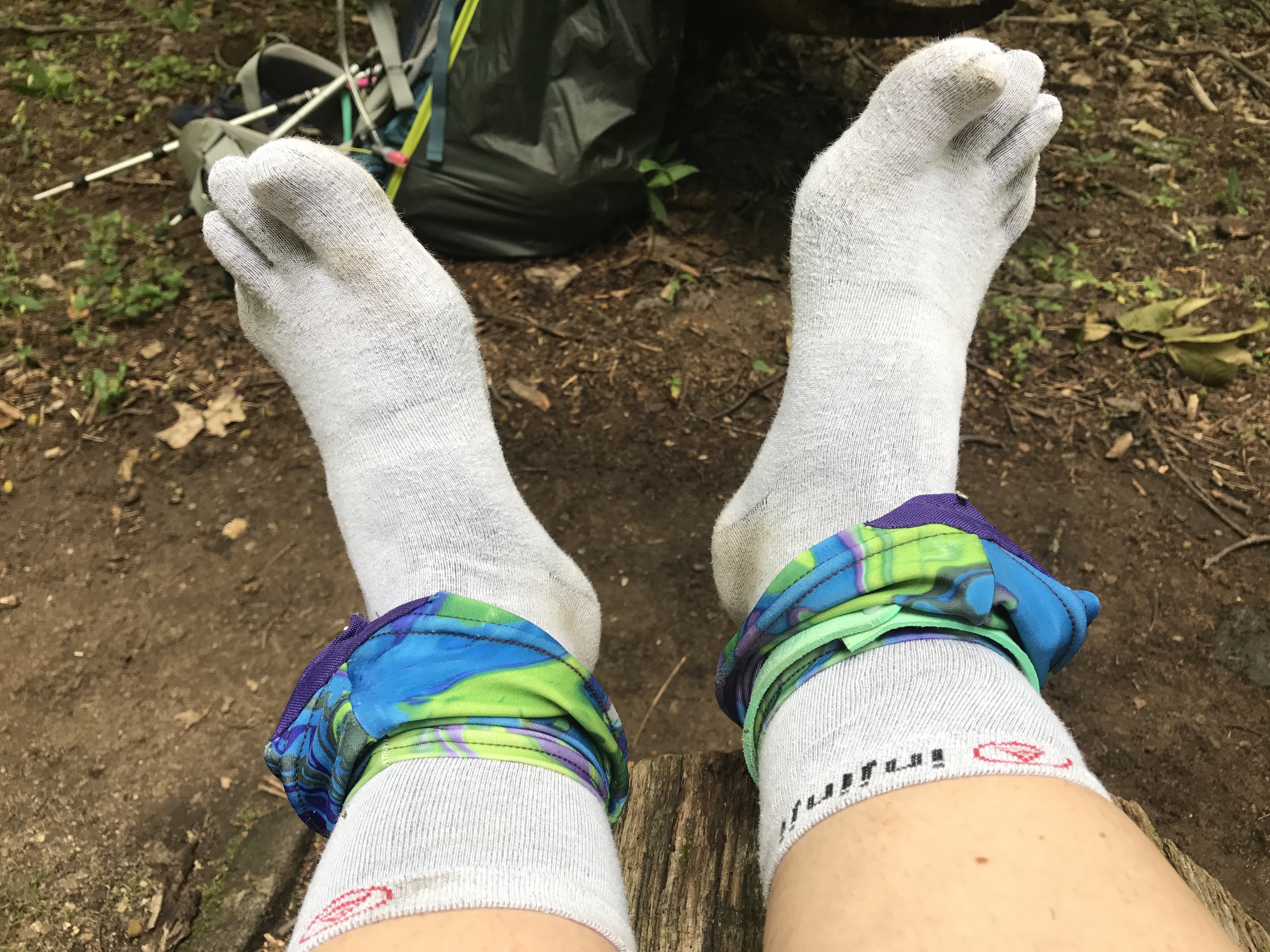 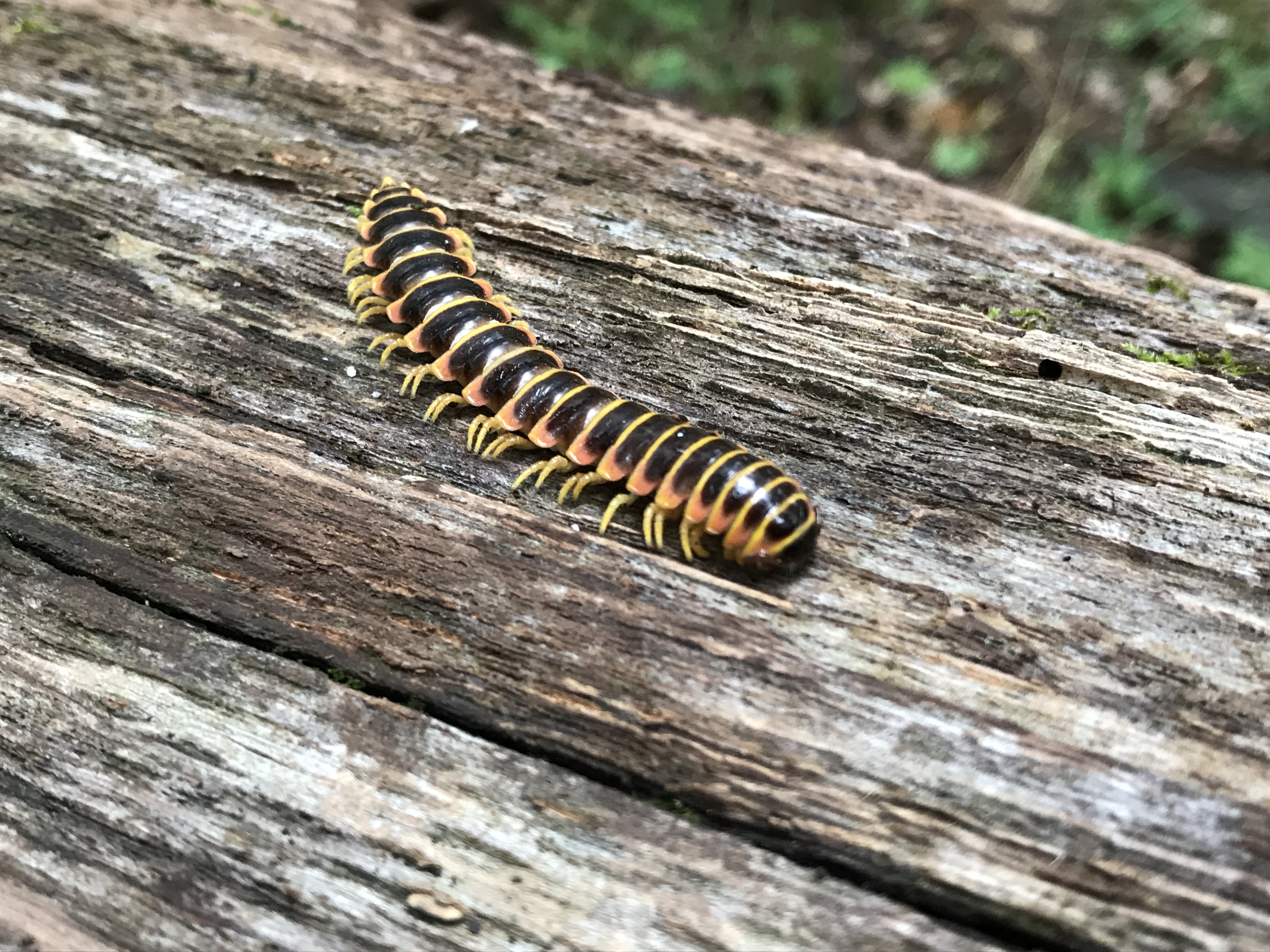 The mother and daughter we had seen earlier breaking camp at the trailhead caught up to us eventually, and for the rest of the day, we leapfrogged with them. They were ahead when the thunderstorms finally came, just shy of the Blackburn Trail Center. We made a mad dash down the giant rock steps that lead to the entrance, hoping to avoid the deluge. Even though it was early in the afternoon, it was raining so hard that continuing further seemed like a miserable idea–there was plenty of yellow and red on the weather radar. 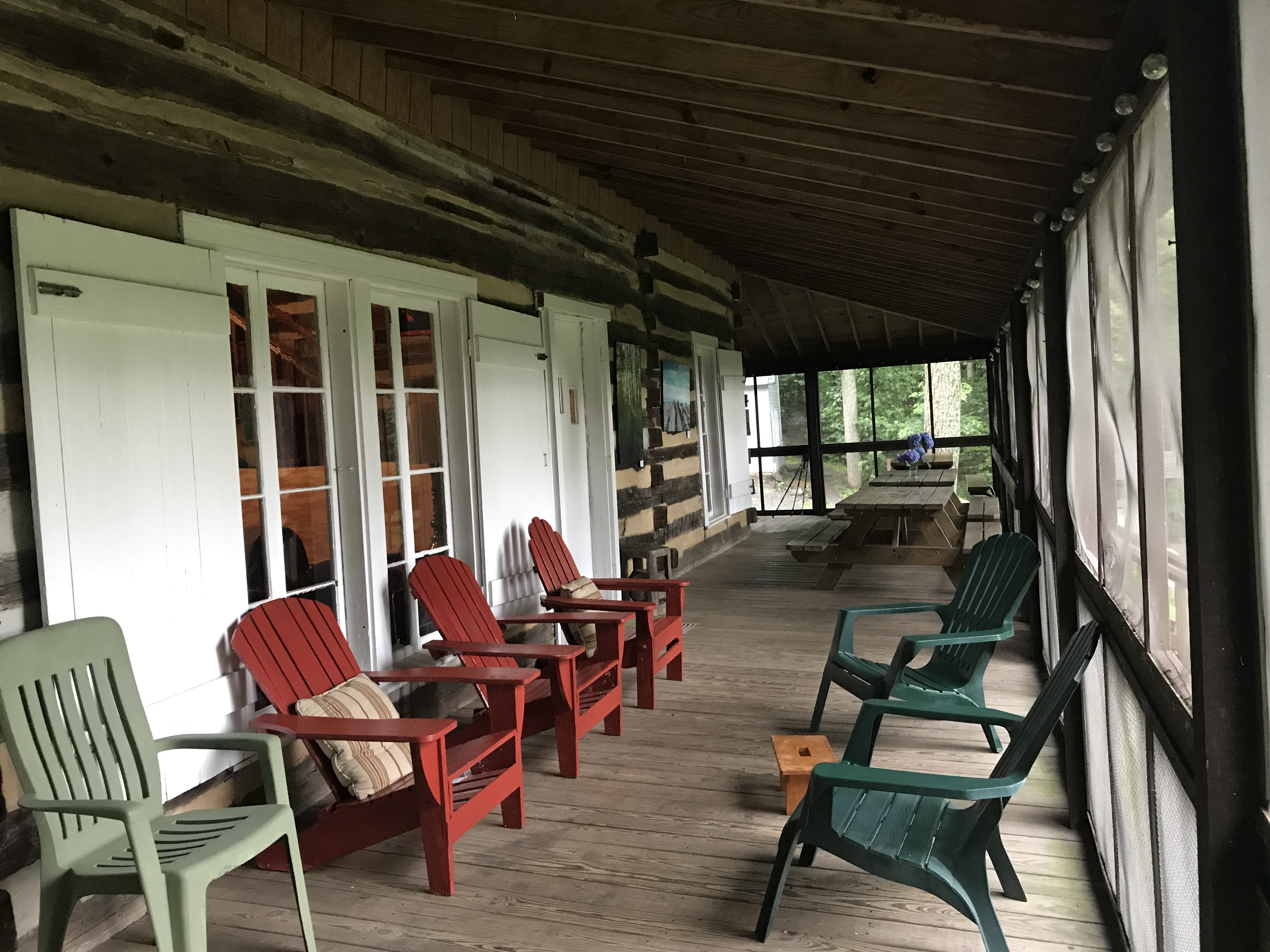 Inside, we dried off at the trail center and began meeting all of the other refugees from the rain. We already knew the mother and daughter, but there were also two sisters in their 70s who were completing a long section hike, a ridge runner, and the trail center manager. A couple of through-hikers would join us later on in the afternoon.

The trail center had hosted a meeting the day before and had leftover food, so before long, huge bowls of pasta salad and green salad appeared, and we all feasted together and discussed plans. Heavy rain was forecast for the next 36 hours, and there were flash flood warnings for that evening and the following day. Robin and I began to reconsider our entry into “the rollercoaster” the next day–the dramatic ups and downs would be hard enough under normal circumstances, but if we had to worry about flash flooding… it wasn’t exactly clear what to do. The trail center allowed for one night stays, and I wasn’t sure if that rule was bent in times of inclement weather, or if it was hard and fast.

After an evening of comparing gear, listening to the older sisters extoll the virtues of using a P-style female urination device, the ridge runner demonstrate proper foot care as she trimmed her toe nails, and a through-hiker showing us the various areas of his soaking wet tent that had begun to delaminate because it had been wet for the first 20 days of his hike, Robin and I finally headed out to the shelter to sleep in the bunks, instead of staying with the group in the trail center. It seemed like it was likely to be more quiet, but that only lasted for an hour or so, when another through-hiker arrived, with only a mylar blanket to sleep with. It sounded like he was crumbling a potato chip bag in his hand all night, but I was so tired that I slept anyway. In the morning, he awoke and went outside for a cigarette and to call someone, so we were treated to second-hand smoke and an eavesdrop of his conversation. Later, as he told us he was attempting an FKT of a certain section, I couldn’t help but feel my bullshit detector going off. When he mentioned checking out his website, I was sure a pitch for a donation was coming next, but it never did. I didn’t recall his name long enough to check out his website when we had wi-fi again, so I guess I’ll never know how his story turned out. 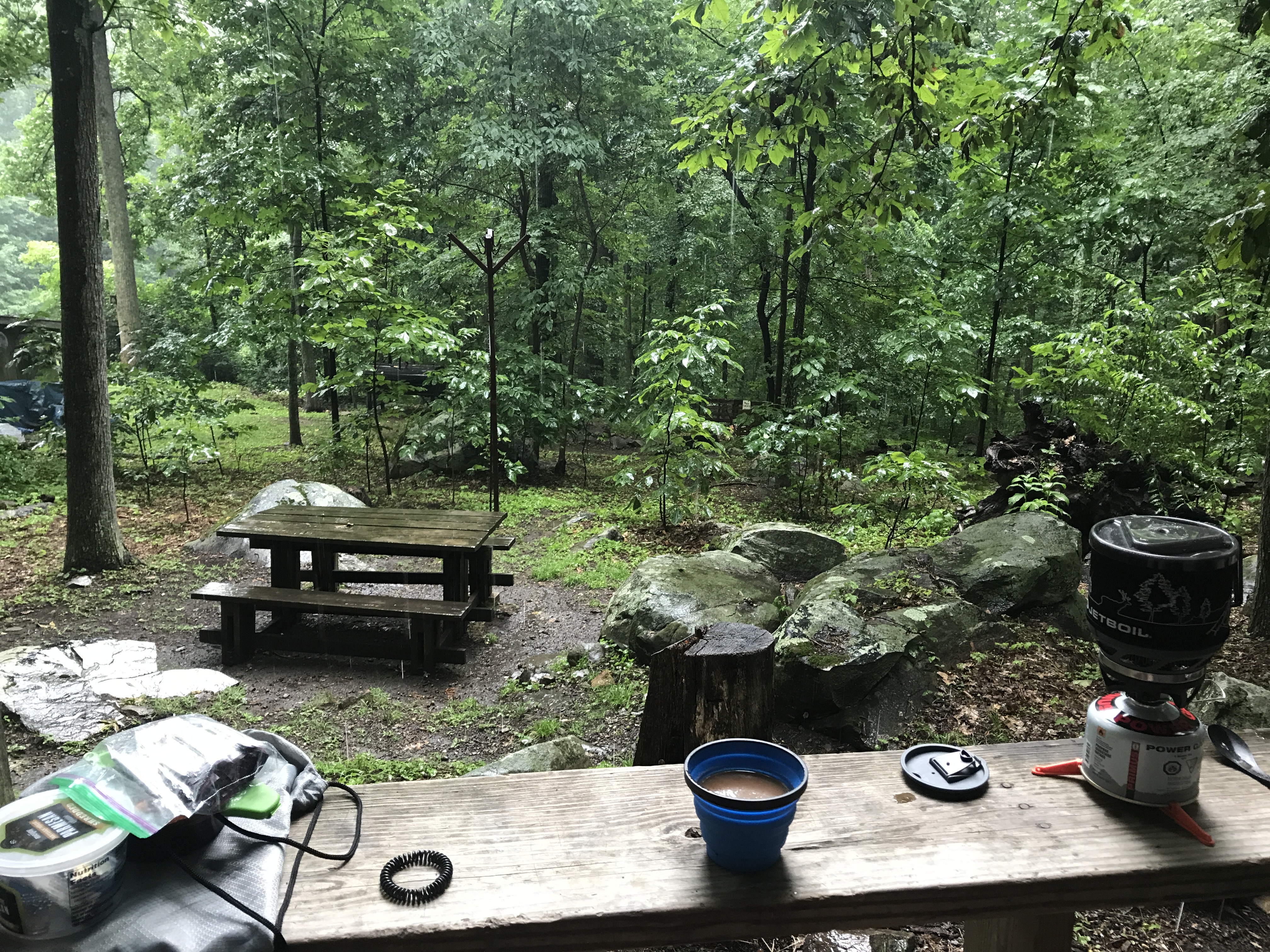 The forecast for the day had not improved, so we talked through options with the trail center director. She suggested hiring a guy who was coming in to the trail center to make a delivery that morning to shuttle us to a point beyond the weather, and that sounded like a fine idea, so we took her up on her offer to call him and ask if he would be willing to do so while we checked weather reports to figure out where to go. We ended up deciding to have him deliver us to our car back in Maryland, and we would figure things out from there. On the drive out from the trail center, the road looked like more of a raging creek, confirming that our decision to relocate our hike had been the right call. 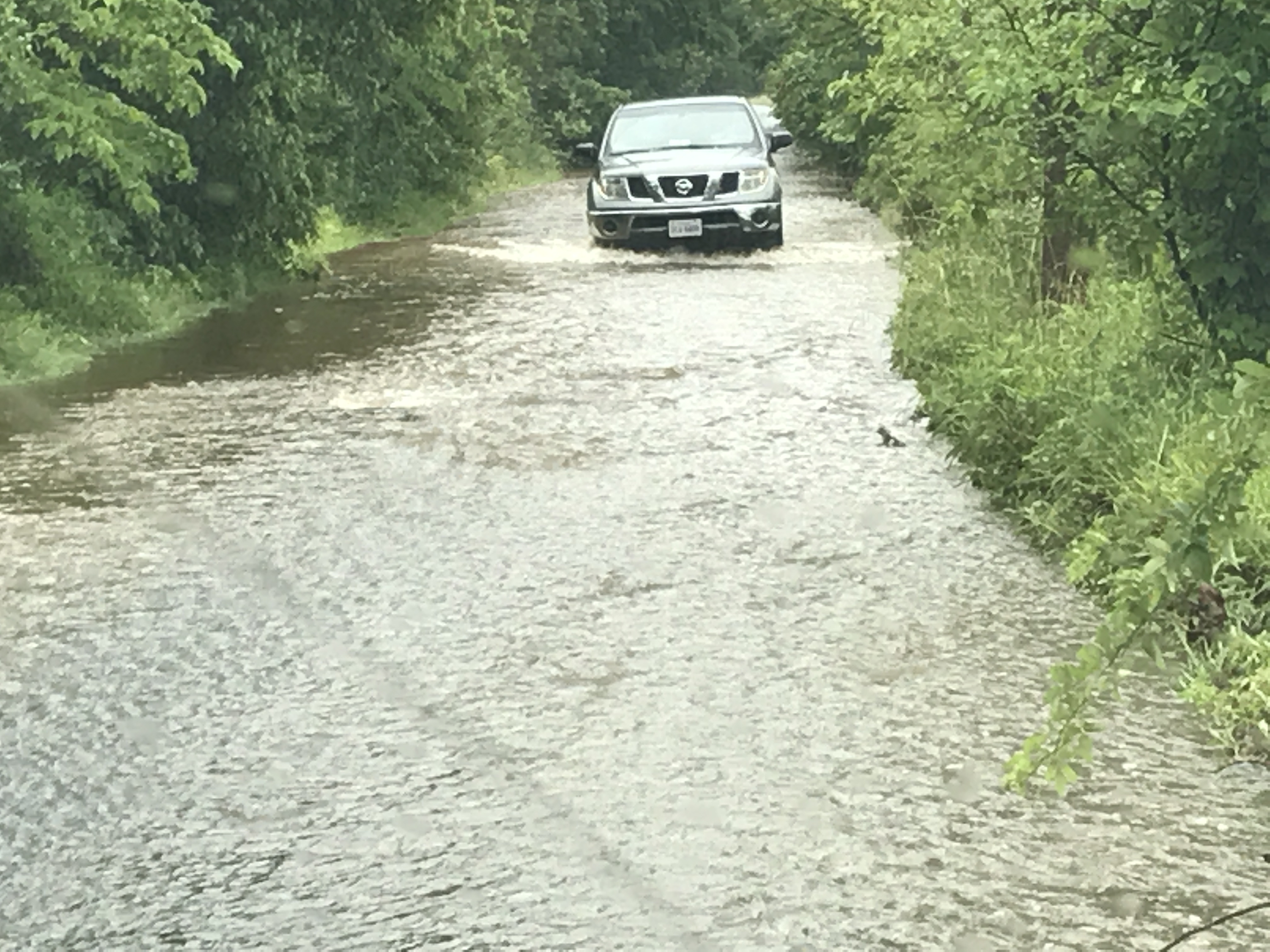 After picking up my car, we landed at a Starbucks to review our maps and discuss options. We decided to try to find someplace dry to spend the night, and then begin backpacking the following day in Shenandoah National Park. After some quick searching, we confirmed reservations with the Mountain Home hostel in Front Royal. This turned out to be quite a find! Upon arriving, the owners gave us a tour of the main house, which they were renovating, and got us settled into the outbuilding that they used for their hiker hostel. The rain, mercifully, stopped.

After showering and delivering our dirty clothes to be laundered, we set out on the trail, which was just across the street, to try to get in a few miles for the day. (Our goal of 100 total depended on at least 10 miles each day, and while we had done more than that each day, a zero day was going to throw off our average.) Plus, after a day in the car, it felt like we needed to get back outside. After all the rain, the trail was flowing enough to be called a water source, but we got in a few miles and enjoyed ourselves, knowing there was yet another shower, and some cold beer that we’d picked up waiting for us when we returned, plus the promise of a home-cooked breakfast in the morning. Then, on to Shenandoah! 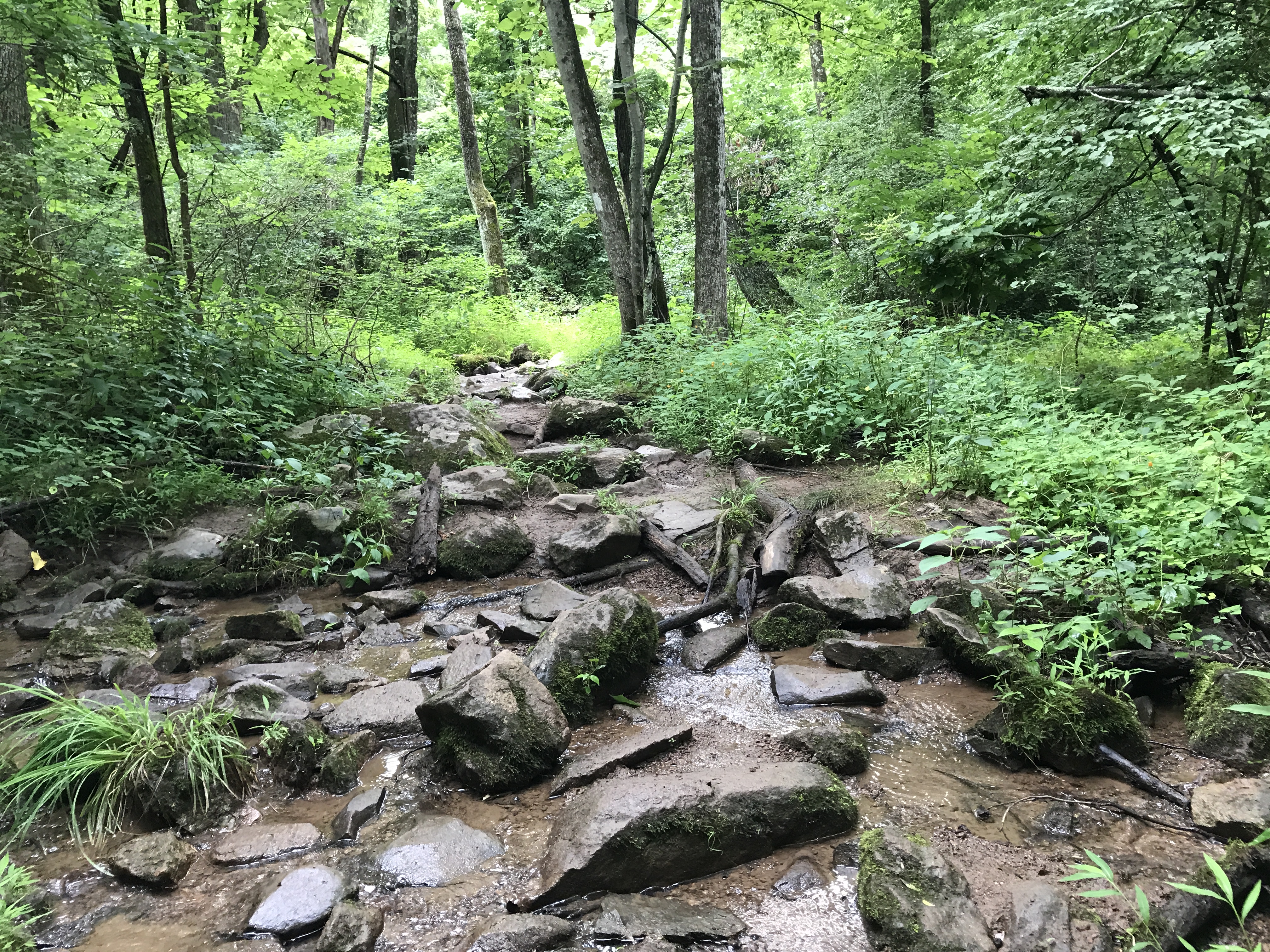